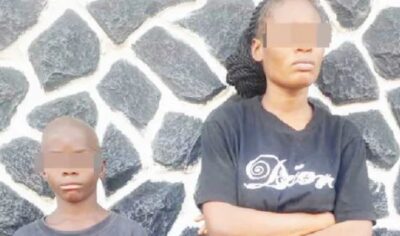 Lagos Woman In Hot Soup After Brutalizing 11-Year-Old Over N1,000

Lagos Woman In Hot Soup After Brutalizing 11-Year-Old Over N1,000: Eunice Agboye, a guardian, has been dragged to court in Lagos State.

The woman was arraigned before Magistrate O.A. Daodu of the Ogudu Magistrates’ Court, Lagos State, for allegedly inflicting multiple injuries on her 11-year-old ward with a wire.

PUNCH Metro gathered that the victim was beaten by Agboye for misplacing N1,000.

The police arraigned Agboye on Monday on one count of assault.

The defendant pleaded not guilty to the charge.

Bassey said the defendant unlawfully and indecently dealt with the 11-year-old.

He said, “The victim, who has been living with the defendant for over three years, was sent to buy something and was given N1000.

Trending Now :  Johnny Depp Set 'To Return' to Pirates of the Caribbean Movie

“He returned to report that the money got lost and was beaten badly by the defendant.

“The victim sustained serious injuries on his buttocks and other parts of his body.”

During the court sitting, Magistrate Daodu ordered journalists to step outside because the victim was a minor.

According to the field official of the Lagos State Domestic Violence and Sexual Response Team, Mrs Bello Oluwakemi, the culprit was remanded in the Kirikiri Custodial Centre.

She said, “The defendant pleaded not guilty to the charge and her counsel, Akhanolu Blessing, asked for her bail, but the magistrate turned down the request.

“The magistrate remanded the defendant pending legal advice from the Directorate of Public Prosecutions and the matter was adjourned until July 14, 2022.”