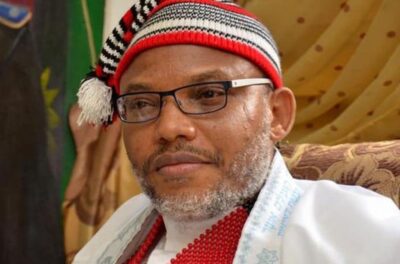 Lawyer Reveals What Will Happen if Buhari Refuses To Obey UN’s Call To Release Nnamdi Kanu: The federal government has been warned of the consequences of refusing to obey a call by the United Nations, Human Rights Council Working Group to release Nnamdi Kanu, leader of the Indigenous People of Biafra.

Aloy Ejimakor, the Special Counsel of Nnamdi Kanu, leader of the Indigenous People of Biafra, IPOB warned that the Nigerian Government’s refusal may trigger a nasty diplomatic conflict.

He noted that such a diplomatic conflict may turn Nigeria into a pariah State.

The UN group indicted both the Nigerian and the Kenyan governments for the arrest and extraordinary rendition, torture and continued detention of Kanu without due process

The UN Working group demanded that the Nigerian Government should immediately release the secessionist unconditionally and pay him adequate compensations for violating his human rights.

Reacting, Ejimakor stressed that the decision of the UN Working group is binding on Nigeria.

A statement he signed reads: “The United Nations Working Group on Arbitrary Detention is a quasi-judicial body that has a subsisting legal mandate of the United Nations to consider and adjudicate human rights petitions against member nations of the UN.

“Its rulings or decisions (diplomatically called Opinions), such as was recently issued in favor of Mazi Nnamdi Kanu, are legally binding on Nigeria on myriad grounds, including the fact that the decision is based on the International Covenant on Civil and Political Rights; and the Universal Declaration of Human Rights, both of which Nigeria ratified several decades ago.

“Ratification is a means by which a nation makes itself subject to international laws and treaties. And by the provisions of Section 12 of the Nigerian Constitution and a plethora of decisions by the Supreme Court of Nigeria, ratification makes Nigeria subject to whatever it ratified.

“It needs to be made clear that the UN Working Group is an integral arm of the United Nations Human Rights Council which has the broader UN mandate to determine human rights issues emanating from member nations of the UN.

“It goes without saying therefore that, as a member of the United Nations, Nigeria is subject to decisions issuing from these UN bodies.

“It will be recalled that the UN body recently considered Nnamdi Kanu’s matter and held that “The removal of Mr. Kanu from Kenya amounted to extraordinary rendition”.

“In clarification, the body further held that: ‘Mr. Kanu’s arrest and transfer to Nigeria lacked a legal basis and due process of law, in violation of article 9 of the Universal Declaration of Human Rights and article 9 of the Covenant’.

“In its conclusions, the UN body held that “The appropriate remedy would be for the Government of Nigeria to release Mr. Kanu immediately and accord him an enforceable right to compensation in accordance with international law.

“Without more, Nigeria is duty-bound to implement this decision in its letters and spirit. And it is expected to do so promptly and to, within six months, file a formal report of its implementation with the United Nations.

“Unarguably, failing to implement this decision would mean that Nigeria is thumping its nose at the United Nations and unwittingly triggering a nasty diplomatic conflict that could make it a pariah State.”