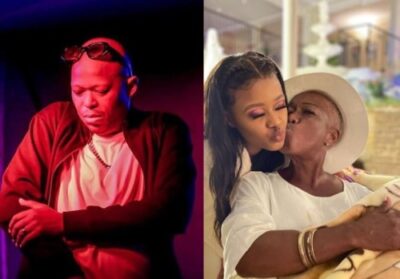 According to Zimoja, Gumede has been ill before her son’s death, but it got worse after his passing on the morning of 24th December 2022.

The Gqom star died of a stroke while receiving treatment in the hospital.

“She had liver complications, but she is now worse. When Mandla died she wasn’t even drinking alcohol anymore.”

“She is not taking Mandla’s death well. She started feeling ill before him but got worse when he was first admitted into the hospital,” Pinky adds. When she heard the news of her death, she became even more ill.”

Zimoja further reported that Zama is yet to accept the death of her son.

“Even now she is still asking for Mandla and I’ve had to tell her that he is at the airport,” Mandla’s sister says.

Pink Gumede revealed her mother needs a private hospital and psychiatrist but no money to take care of the bills.

“I am even scared to ask them for help. It is costing me more than R140 to travel to the hospital every day to see uMa and I am running out of funds. I heard that the Simelane family knows that she is in hospital, but I am afraid of being the one that calls them and be as though I am harassing them. I don’t know what we have done to them. We are not greedy people; I just want her to be okay so she can deal with her son’s death,” Pinky added.

IMPORTANT NOTICE: STAY AWAY FROM THIS PART OF LAGOS IF YOU’RE NOT AN INDIGENE! SEE DETAILS

It’s been confirmed that the Eluku Festival of Ikorodu Town will commence from Saturday 26, August 2017 to Tuesday 29, 2017. According report, the advice/notice was given by the paramount ruler of the town Ayangburen […] […]

SEE PHOTOS FROM THE EARTHQUAKE IN MEXICO!

A very powerful which some agencies measured to be of magnitude 7.1 and others rated it to be 6.8 has killed over 200 people and destroyed properties in Mexico. See more photos below. SEE FULL […] […]