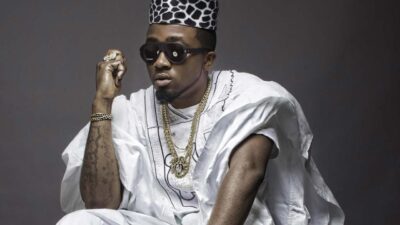 His arrests has since been met with mixed reactions on social media.

The singer, who currently trends as number one on Twitter, seems to have some sentiments on his side as many tweeps knocked the police and sought to hear the singer’s side. Some others, however, maintained that Ice Prince was not above the law.

The PUNCH reported that the ‘Oleku’ crooner was arrested in the early hours of Friday for alleged assault of a police officer, according to the command’s Public Relations Officer, Benjamin Hundeyin.

Here are some of the tweets gathered from Twitter:

“Ice Prince driving without license plates, I can believe. Him assaulting a police officer in Lagos by 3:00 am, I can’t believe without evidence,” says @snrmanOA.

“Lol, if you’ve had any altercation with the police, especially in Lagos, you’d know why it’s so hard to believe,” he added.

@drpenking said, “I would still love to hear Ice Prince’s side of the story because how did an armless citizen abduct an armed policeman? How come the policeman was alone? What about his colleagues? Some things are not adding up.”

“It took Nigerian police less than eight hours to arrest Ice Prince for harrasing their officer but it will take them forever to respond when ordinary Nigerian is being harassed by police, Naija police doesnt understand innocent until proven guilty, they treat every suspect as a criminal.

“Have you seen how the United States police approach suspect when they want to interrogate them or make an arrest? the process is always easy, smooth and violence free. Here, to do ordinary stop and search, police will attack you as if you just robbed the Central Bank of Nigeria, so embarrassing, ” @Tee_Classiquem1 tweeted.

@JoeyAkan said, “My heart is with Ice Prince.

“If you know how Nigerian police officers lie and entrap you when things don’t go their way, you’ll never believe everything they say, especially when they see an opportunity to chase PR spotlight as victims of the populace.”

@JdiBobby tweeted, saying he didn’t trust the police, “I still don’t trust y’all Nigerian police. Speaking from experience, y’all can say and do anything if someone doesn’t play your ball by giving you bribe. Will wait for Ice Prince @Iceprincezamani to speak. Don’t trust y’all.”

@Nsukka_okpa talked about why the singer was looking somehow in the picture shared by Hundeyin.

“If you’ve been at any police counter before, you’ll understand why Ice Prince was looking that way. The amount of Insult they hurl at you plus the small small slap you’ll chop. Your face go don swell up before lawyer show,” he tweeted partly in pidgin.

Being a celebrity doesn’t place you above the law, said @SirDavidBent, who tweeted, “Ice Prince abducted a police officer and threatened to throw that same officer into a river. He has been arrested and will be arraigned on several criminal charges/counts.

“Being a celebrity doesn’t mean you’re above the law. He might end up being jailed for a while.”

@Mbahdeyforyou said, “We don hear police side of the story, true true wetin Ice Prince do no good.”

@iSlimfit said, ‘What was Ice Prince thinking? He could have at least called one of his connects in the police to sort him out instead of this embarrassment he put himself into. Now he’ll be made scapegoat.”

@mogsteady also tweeted, saying “Look at how quick police was to arrest Ice Prince and post on Twitter, the same police that will take three days to answer our tags here over police brutality.

@ddannykeyz said, “So, you are telling me that on this same app where we are privy to horrific stories of police brutality, wanton abuse of power, and extortion, yet we automatically agree that Ice Prince abducted an armed police officer? The brain drain is crazy. Una don dey trust police?”

@_oluwaseun9 said, “Once Nigerian police catches you come use their Itel camera snap you, your colour must change. see my blud Ice Prince.”