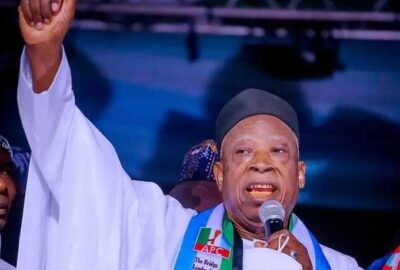 Muslim/Muslim Ticket Is The Will Of God – APC Chairman, Adamu

Muslim/Muslim Ticket Is The Will Of God – APC Chairman, Adamu: Abdullahi Adamu, the National Chairman of the ruling All Progressives Congress (APC), has commended the party’s Muslim-Muslim ticket, stating that it is the will of God.

Speaking on Wednesday, July 13 when he led the party’s National Working Committee on a courtesy visit to President Muhammadu Buhari at his residence in Daura, Katsina State, Adamu said the party went through a rigorous practical assignment on the selection process before arriving at the Muslim-Muslim ticket.

Insisting that Kashim Shettima is a Nigerian citizen who doesn’t need to be either Muslim or Christian before being selected as running mate to a presidential candidate, he added that the party is working hard and praying to win the forthcoming 2023 General Elections.

Adamu also thanked Christians in the country for showing interest in the Muslim Muslim ticket.