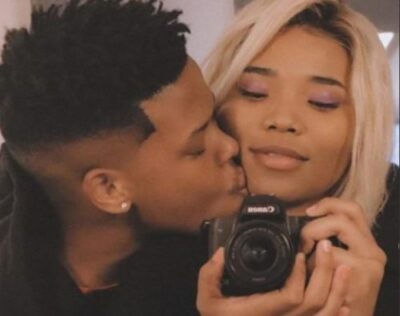 “Nasty C made me fearless,” Sammie On Rapping

“Nasty C made me fearless,” Sammie On Rapping: Nasty C’s girlfriend, Sammie Heavens has delved into rap music and she’s opened up about the process.

According to Drum, Sam whose real name is Ntombizodwa Beatrice Sibanyoni says she’s creative and has been a poet before accepting the calling of being Sam the Rapper.

“I’ve always been creative, but it took me a while to believe that what I was creating was good enough to share. The poetry gave birth to Sam the rapper. After sharing my poetry on TikTok and seeing people’s reactions that’s when I thought I might have something.”

Beatrice said she was afraid to inform her boyfriend of being a rapper as he might think she’s being unserious.

“I was scared to tell him that I wanted to rap, I was scared he would think I’m not taking it seriously. I didn’t want him to think I am mocking the arts or that I’m just doing it because I saw him become successful off it.

“He inspired the passion and he pushed me to be unapologetic about me pursuing music. He made me fearless after I told him I wasn’t scared of anything,” Sammie added.

Since she’s become fearless, Sammie is set to put out more music following the release of her debut EP.

“I wrote all the songs earlier in the year and I was scared to put it out. I will be dropping new songs and I am excited for everyone to hear them.