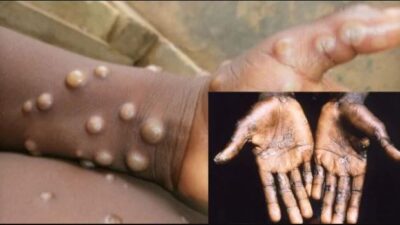 NCDC Confirms 31 New Monkeypox Cases: According to a report by The PUNCH, the Nigeria Centre for Disease Control has said 31 cases of monkeypox have been confirmed in the country.

The NCDC disclosed this in its latest monkeypox situation report released on Friday.

The agency said between January 1 and June 5, 2022, the disease has been confirmed in 12 states, including the FCT.

The agency also confirmed that no fewer than 110 suspected cases of the disease have been reported in the country, up from the previous 66 suspected cases.

The PUNCH reports that the NCDC activated a monkeypox National Emergency Operations Centre in response to the risk assessment conducted, which put Nigeria at high risk for a Monkeypox outbreak.

The essence of the activation was to improve the coordination of related preparedness/response activities across the country, the NCDC said.

The World Health Organisation said monkeypox is a viral zoonosis (a virus transmitted to humans from animals) with symptoms very similar to those seen in the past in smallpox patients, although it is clinically less severe.

Monkeypox is caused by the monkeypox virus which belongs to the orthopoxvirus genus of the Poxviridae family. There are two clades of monkeypox virus: the West African clade and the Congo Basin (Central African) clade.

WHO noted that the monkeypox virus is transmitted from one person to another by close contact with lesions, body fluids, respiratory droplets, and contaminated materials such as bedding. The incubation period of monkeypox is usually from 6 to 13 days but can range from 5 to 21 days.

The global health body said various animal species have been identified as susceptible to the monkeypox virus.

“Uncertainty remains on the natural history of the monkeypox virus and further studies are needed to identify the exact reservoir(s) and how virus circulation is maintained in nature. Eating inadequately cooked meat and other animal products of infected animals is a possible risk factor,” WHO said.