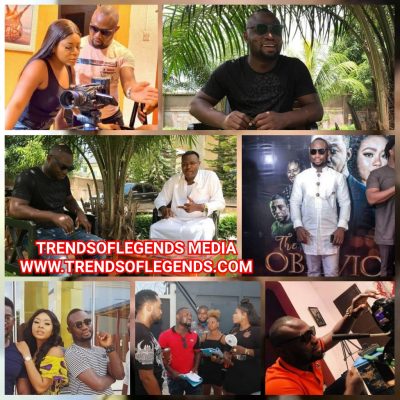 NDave David Chiweike Next Face of Nigerian Filmmakers: This article houses brief history or description (Biography) and profile of NDave David Chinweike; as well as his achievements in Nigerian Movie Industry (NollyWood).

This publication will highlight on the following about the personality: 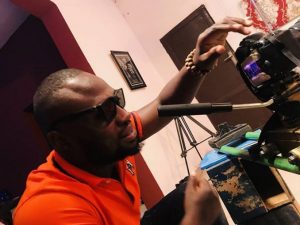 Get used to this face because you will be seeing a lot of it in the movie production and directing world. His name is NDave David Chiweike, and he is a Nigerian filmmaker, Producer, and Director. He is considered one of the most creative filmmakers in the Southeast Region of the new Nollywood. NDave started as a Director in Nollywood in the year 2016, directing a renowned television series ‘AFRICAN BEAUTY,’ that aired on African Magic Showcase and other top TV stations in Africa. 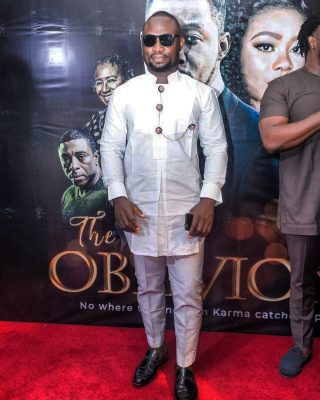 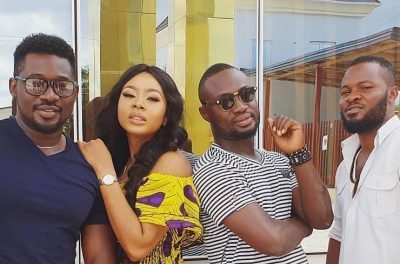 He became a household name as the director of THE OBLIVION (2019), his first cinema movie, which had top actors like Daniel K. Daniel, Patience Ozokwor, Collette Nwadike, Bob-Manuel Udokwu, Charles Okocha, Stan Nze, as the cast. Other releases are Neighbours (ROK STUDIO), starring Nonso Diobi and Destiny Etiko, Bianca My Wife, Government Treasure, 24 Hours In The States, Pains & Sorrow, My Wife My Enemy. 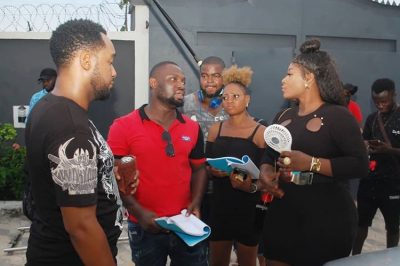 The Enugu state filmmaker (Nkerefi to be precise) was born in the year 1986 on the 14th day of the month of April. He grew up in Warri and attended Delta State University, Abraka (DELSU) in the year 2007.

NDave got into the movie scene as a Production Manager, Assistant Director, and Writer in the year 2014 and has been consistent and hard-working to date. Before then he starred in his first movie ‘SMACKDOWN,’ with A-list actors like Van Vicker, Chiwetalu Agu, and Uche Jombo. He then produced a short film titled ‘THE WARLORD‘ and in 2008, NDave wrote, co-directed, and also was a co-executive producer alongside Oshilim Gabriel and Oshilim Anthony, a movie, ‘WICKED CONSCIENCE,’ starring Chiwetalu Agu, John Paul, Uche Elendu, and Emmanuel Ahummadu a.k.a. Labista. The movie had a poor turn out and he went in for a four-year break.

In 2012, Ndave started from scratch as a location manager in Awka, Anambra state. A year later he combined both the location manager and the position of production manager. Then he went into Producing again and has made the following movies;

In 2015, Ndave David co-produced the first-ever blockbuster cinema movie in the Eastern region, ‘THE LAST KIDNAP.’ The movie was produced by KAS-VID International and directed by Ifeanyi Ikpeonyi a.k.a. Mr. Hollywood. In 2016, NDave got the opportunity to shoot his first short cinema film titled ‘THE INHALER‘ by CD Initiative Films. He also co-produced another blockbuster, ‘POLYGAMOUS FAMILY’ starring Pete Edochie, Remi Ohajianya, Imet Goodluck .a.k.a. Tallest man. The film was produced by OG Best International. 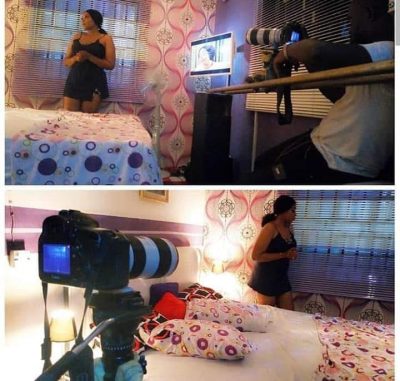 In 2018, NDave David produced and directed his first hit movie titled ‘Bianca, My Wife’. The film had a star-studded cast in the likes of Ken Erics, who was the lead role, Luchy Donald, Daddy Sam Obiagu, and many others. The filmmaker has had a thing for working with top actors in most of his productions. Jide Kosoko and Collette Nwadike were seen in his 2016 directed-TV series ‘African Beauty.’ NDave has produced over 40 movies and directed over 25. His most recent jobs are ‘Ogu Nwanne’ starring Harry B Anyanwu, Chizzy Alichi, ‘Injustice’ with Steven Odimgbe (Flashboy), Harry B Anyanwu, Evelyn Essien, and ‘Marriage Crisis’ starring Nosa Rex, Queeneth Herbert, Cardinal Okpanum, Ujunwa Mandy Obi.

The Sunrise Entertainment Awards’ Best Creative Filmmaker 2019 Nominee has been a real peach in the industry and below are some of his recent works;

NDave David has always had a frown upon his face when incompetence and insubordination are before him. #WEEOBSERVE had a sit down with him and he had a lot to say about his experience so far in the industry. 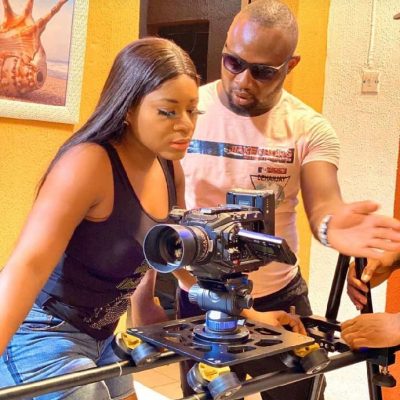 When asked about his relationship with his Cast and Crew, NDave said

“I am mostly lenient, too lenient with them which mislead them in their seriousness with roles and this affects the production and budget. It is most especially difficult working with people who fail to grasp the concept behind your ideology.

As a Director, one of the greatest challenges most of the actors in the Southeast have is their inability to read the movie scripts before appearing on set.

Scripts are meant to direct the actors and crew. It is a lead for acting and producing. There are a few movie celebrities and everyone wants to work with these people which makes it hard for them to assimilate your own script before coming on set. On getting to your set after you’ve duly paid their fee, they disappoint your expectation of bringing the best. They end up killing the scripts as they did end up reading it on set and start making suggestions. They do not have prior knowledge of the background of the story and this makes directing hard.

There is something called Script Conference – but it can’t happen because the actor has to have read and studied the script, which in most cases they don’t. When you contact most of these actors their first response is the money they’ll be paid instead of the script and what the movie is about. The product connecting the actor and the director is the script and is the most important item in movie production.

Personally, I leave my own set with a hole in my heart when I don’t get to achieve my movie’s selling point which is mostly found in one or two scenes. When the actor gets to go through the script on set and sees one or two things he/she is incapable of pulling off, it becomes too late to practice or rehearse and they end up throwing away my Promo concentration.”

WE went further to ask him why he and most filmmakers around use known actors and he said,

“We have a small market in the Nigerian movie scene. Bef0re now, Nigerian movie was the sole entertainment for both the youth and the old. Nowadays other media has popped up and taken precedence. You’ll discover that it is the same set of people that patronize our movies and they are familiar with certain actors, they know the trends also. If you use actors they are not familiar with, your chances of sale recovery are 65%.”

And in choosing Directors, NDave stated that he does that based on merit. He said,

“Before I started directing, I chose directors based on merit (s). 90% of movies I have made were written by me, and while writing I already consciously pick out four different directors that may be best suited for the film. Though, since my inception into Directing, I have directed all my movies myself. Who best to interpret the script to my taste and satisfaction than me. Movies in Nigeria cost from a range of two million to one billion Naira and that’s a lot of money to waste on incompetence. Don’t you think so?”

Well, WE think so and know so. 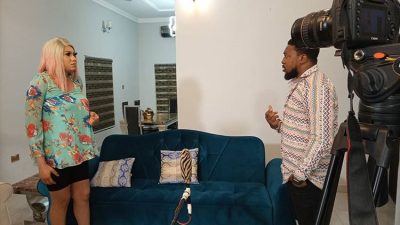 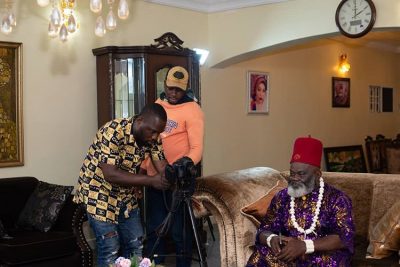 NDave David Chiweike’s favorite actor is any actor who is able to deliver his script at any given time. An actor who can get the script to his movie, read it, come on set and add real value. The Nkerefi filmmaker said he has no filmmaker he looks up to though. He mentioned a few he admires; the likes of Steve Gukas (Living in Bondage: Breaking Free), Izu Ojukwu (‘76), Ifeanyi Ikpoenyi (who he has worked with on several occasions). He said,

“I don’t look up to any filmmaker. I just admire their works and get encouraged. Looking up to is the wrong word for me because I believe no human is above mistakes. I also admire upcoming filmmakers and advice that they do the same. Just admire and be encouraged. Don’t look up to someone and end up taking all, even blunders. Learn to pick your own beans from the stones.” 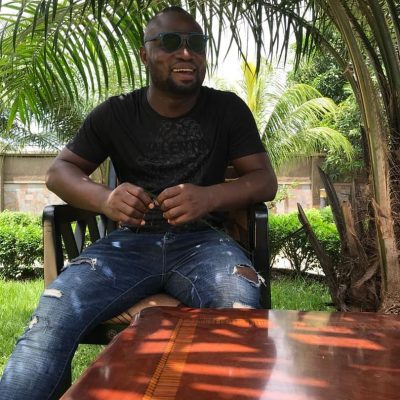 WE finally asked him his driving force, where his passion for the movie world came from, and where he saw himself in five years,

“Sometimes I ask myself the exact same question during productions. In all the stress and inconveniences sometimes, I still thank God for everything. Truthfully, the reason why I do this is beyond my comprehension.”

“Only God knows where I will be in five years but I wish and pray for greater heights every second of my life. Five years ago I didn’t know I’d be here today. I have been a Movie Director in just three years so if I could attain such goals in this short time, imagine what I’d do in the next five years.” 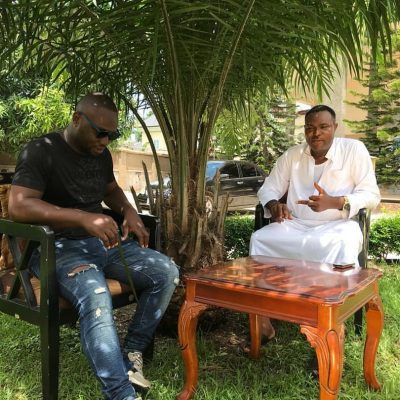 NDave David Chiweike is an inspiring young man and professional filmmaker and it was an honor sitting with him. His advice to upcoming actors is,

“I advise that if you want to be an actor, first learn to manage yourself and pressure. Before you embark on any production make sure you’re conversant with the script. Just like a farmer can’t go to the farm without his cutlass or a policeman to the rescue without his firearm, your script is very vital.”

Ndave’s first audition was in 2004 under the supervision of Mr. Perfect, who cajoled him and told him he had no future in the movie scene. The next day he went back to the audition ground and took a piece out of their script. He used the script to modify and story in his head and wrote a 4-page script. He took the script to St. Paul Catholic Church, Delta State University, and went for an outing with the drama team. From there people began encouraging him to venture into the movie world.

His hobbies are making researches and playing games.