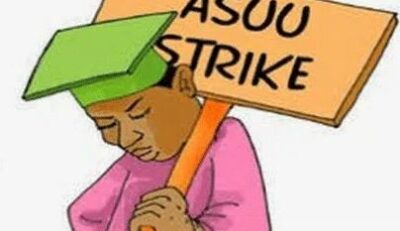 Nigerians React As ASUU Extends Ongoing Strike: Nigerians have taken to social media to react following reports that the Academic Staff Union of Universities (ASUU) has extended its ongoing strike.

Recall that we reported that ASUU decided to extend its ongoing strike after a series of heated discussions during its National Executive Council (NEC) meeting.

The meeting was held at the union’s headquarters at the University of Abuja from Sunday till Monday morning.

Recall that the strike, which began on February 14th, entered the 196th day on Monday (today) after the government failed to meet some of its demands.

Some of the union’s demands include payment of earned allowances and salaries for lecturers, improved funding and maintenance for tertiary institutions.

Other demands are the adoption of the University Transparency and Accountability system (UTAS) for salary payment instead of the government’s Integrated Payroll and Personnel Information System (IPPIS), and the renegotiation of the ASUU FG 2009 agreement, among others.

However, some Nigerians have taken to the micro-blogging platform, Twitter to express their reactions to the development.

See some of the reactions below.

@japaprofessor_ wrote: “Sad, students should better start getting productive and stop hinging their hope on the outcome of FG-ASUU meetings.”

@AhanotuIkenna wrote: “Sad to say, but students should forget going to school this year. I don’t see that strike being called off till after the elections except if something happens.”

@IamShola_best wrote: “Federal Government should just allow those that want to resume among the lecturers go back to class and dismiss the rest and pay those that resumes, then recruit new people to take the place of those that will be dismissed.”

@ukange_davidx wrote: “Every time they call for a meeting. I always have this feeling we Gonna get bad news.”

@Miniboyyrn_ wrote: “Tho my sister is crying for a big help, we wey dey polytechnic na hin dey go school gan these days.”

@ImLegendl wrote: “They should be expecting rebellion from some universities, I don’t know if these people are actually thinking about the students they stand to fight for anymore.”

@erust16_boehly wrote: “It has now entered an indefinite strike. But if you consult me, I can twart them to call off the strike in less than 3 weeks.”