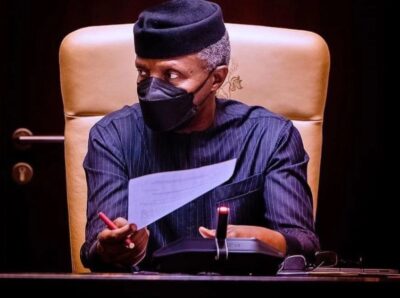 The family of the late British Queen has, so far, invited no fewer than 500 heads of state and other foreign dignitaries across the world for the funeral of the late monarch.

SaharaReporters learnt that Nigeria’s Vice President, Yemi Osinbajo will represent the country at the funeral which will take place in London on Monday.

A host of world leaders, royalty and other dignitaries are expected to attend the funeral.

Invitations are being sent to all holders of Britain’s highest military honour, the Victoria Cross and the George Cross, which can also be held by civilians, BBC reports.

It was reported that in total, foreign office officials have handwritten around 1,000 invitations for the funeral and reception with King Charles III on Sunday. The deadline to accept funeral invitations elapses tomorrow after which officials will finalise the seating plan.

According to Daily Trust, sources from the Presidential Villa, Abuja confirmed that President Muhammadu Buhari would be represented by the Vice President which will be held at Westminster Abbey.

Trending Now :  Biography Of Tyrese Gibson (Age, Net Worth, Others)

Based on the arrangement by the royal family, the majority of leaders attending the funeral have been asked to arrive on commercial flights and told they would be bussed en masse from a site in West London.