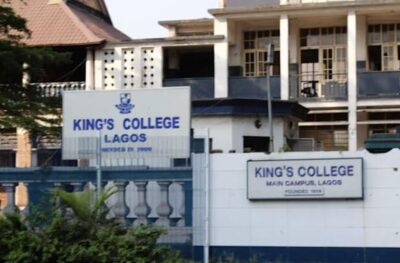 Parents Protest As King’s College Moves All Day School Pupils To Boarding: Some aggrieved parents whose wards attend King’s College in Lagos have expressed displeasure with the management’s decision to transfer all day school pupils to a boarding facility.

The parents during a protest beckoned on Senate President, Ahmad Lawan; Speaker of the House of Representatives, Femi Gbajabiamila; minister of education, Adamu Adamu; and Lagos State Governor, Babajide Sanwo-Olu, to intervene.

The parents said they removed their children from the boarding facilities due to gangsterism, bullying and cultism going on in the school.

“We want the government to intervene in ensuring that the head teacher reverses his order to status quo. With the immoralities perpetrated by the boarders, no parent will allow his child to live in the school environment,” a parent, Prince Henry Akintoye-Dosunmu said.

“You will not believe that some parents removed their children from the school boarding facilities because of gangsterism, bullying and cultism going on in the school.

“The headteacher threatened parents at the last PTA meeting that whoever did not want his child to attend boarding school should take him out of the school. It is wrong, this is why we are calling on the government to intervene because we are giving the school management a seven-day ultimatum. If not reversed, we will come out en masse and not leave the school until something is done.”

The parents also called on the management to reduce the parent-teacher association (PTA) development levy to the amount paid in other unity colleges across the country.