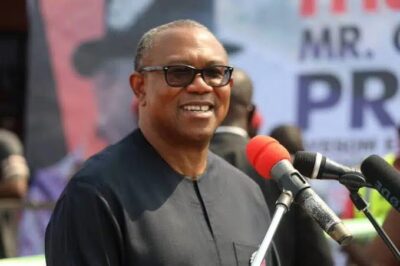 Reacting to the claim which has been fact-checked by some notable news platforms and found to be false, Obienyem said:

“Our attention was brought to the above campaign of calumny launched by some faceless groups.

“Is it by coincidence that it came when we were reliably informed that some political parties have charged their political office holders to hire people to relentlessly attack Obi with falsehoods on all available social media platforms?

“The false writer said that after the killing of northerners on the 21st and 22nd of March, 2006, before Peter Obi became the governor, his reaction came in the form of a statement, namely: ‘you people should tell your people to stop killing our people in the north’

“This is complete falsehood. If Obi made that statement, it would have been lavishly published by the media. Would the author show us the link where the statement was published?

Trending Now :  (Photo): Baby Dumped And A Note Dropped By Her Side In Lagos

“The false writer said Obi requested the DSS to remove Hausa traders near his house. He wrote that the Hausa man was invited by an Igbo bar man to attract more customers. The truth is that there were no bar men at all.

“The person that was removed by the estate security on their own was a woman selling articles like biscuits because she also supplied drugs to bad boys. As I write, the suya seller is still there.

“Obi is desirous of becoming the President and he has been going around telling people the problems of the country and how he hopes to solve them. He expects other contestants to do the same rather than sponsoring falsehoods to pitch him against the people.

“During his tour of the north, Obi, for example, made it clear that expanse of land in the North for agricultural purposes is a great gift to Nigeria, which if properly managed, would be able to feed the nation and for export.”