Recall that he was kidnapped from the parish rectory of Saint Charles Catholic Church, Zambina in Kauru Local Government within the early hours of Monday, June 4.

The incident comes less than two weeks after the priest in charge of the Kaduna Polytechnic Catholic community, Reverend Father Vitus Borogo was killed on his farm at Kujama in Chikun Local Government Area of Kaduna State.

A statement released by the Catholic Diocese of Kafanchan says the priest was released at about 9pm last night. 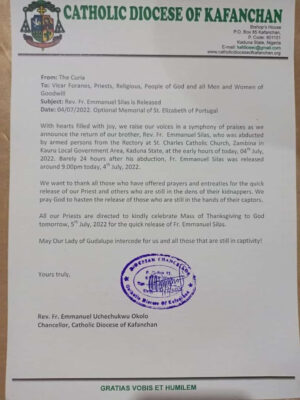