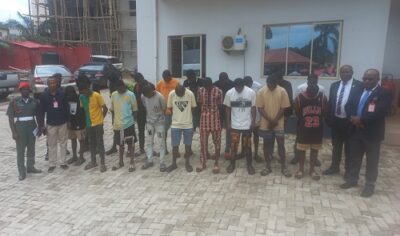 The arrest of the suspects numbering around 35 was confirmed by EFCC Spokesman, Wilson Uwujaren on Monday.

He said 17 of them were arrested on Thursday at the Akobo area of Ibadan following credible intelligence on their alleged fraudulent activities.

According to Uwujaren, the remaining eighteen suspects were apprehended by officers of 2 Division, Nigerian Army, Ibadan and handed over to the Commission for further investigation.

Mobile phones, laptops, Seven exotic cars, one smart television set and incriminating documents were recovered from the suspects during the arrest.

The 18 suspects who were handed over to the Commission by Lieutenant Goni Tijjani Ibrahim were arrested at Ihejirika Garden, near the Army Cantonment, Ibadan, following series of complaints from the residents regarding their fraudulent activities.

Items handed over alongside the suspects include mobile phones and one smart wristwatch, among others.

Uwujaren added that the suspects will be charged to court as soon as investigations are concluded.