Police Arrest Man After A Random Lady He Brought Home Died During S3x: A Twitter user has taken to the microblogging platform to narrate how his neighbour was arrested after a random girl he brought to his home died while they were having s3xual intercourse.

The Twitter user @josh_uglyasf stated that the man boasts about changing women a lot, and all advice given to him to stop having s3x with multiple partners fell on deaf ears.

Recently, the said man brought a lady home who unknown to him is asthmatic. While they were having s3x, the young lady passed out.

The police were invited and were able to remove the unconscious lady from his apartment after which they took the man into custody.

Read The Story Below; 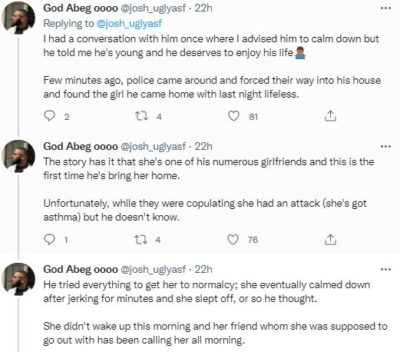