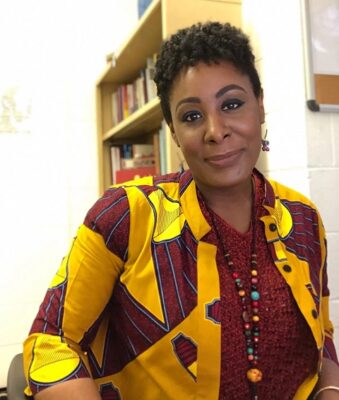 Her tweet caused serious outrage with many against and for her.

It all started hours before the Queen’s death was announced, Professor Anya wrote on her Twitter page, “I heard the chief monarch of a thieving r3ping genocidal empire is finally dying. May her pain be excruciating.”

In another tweet, she referenced the rumoured role of the British empire in supplying the Nigerian government with arms and ammunition during the nation’s civil war which spanned 1967 – 1970.

“If anyone expects me to express anything but disdain for the monarch who supervised a government that sponsored the genocide that massacred and displaced half my family and the consequences of which those alive today are still trying to overcome, you can keep wishing upon a star,” she wrote, following the announcement of the Queen’s death.

The tweets drew the attention of many including Amazon founder, Jeff Bezos, who quoted the post and wrote, “This is someone supposedly working to make the world better? I don’t think so. Wow.”

Aide to President Buhari, Bashir Ahmed, also tweeted, “Don’t know that Uju Anya until I saw some of her tweets for the first time on my timeline this evening, her tweets about late Queen Elizabeth II were so unfortunately unnecessary.”

Another tweep, @novieverest wrote, “You can condemn slavery and colonization without being an Uju Anya. Her statement was terrible and you can’t defend it. It is that simple.”

However, many others defended the Professor for speaking out against the colonial legacy of the British Empire under the late Queen.

Stating that Anya’s tweets are a reflection of the unspoken sentiments of many, @vickkingsley wrote, “the thing with Uju Anya’s tweet is, a lot of people feel exactly the way she feels but she was bold enough to state even those who feel the same way as she are all dragging her. Uju Anya is the villain now but you have had massive disdain for the British government, colonialism.”

“I stand with Uju Anya. The level of sympathy Queen Elizabeth who died peacefully is over, levelling the sympathy given to Africans who died as a result of colonialism because there was no social media,” @Philosophiero1 tweeted.

Carnegie Mellon University, the American institution in which Anya lectures also released a statement distancing itself from the professor’s comments.

“We do not condone the offensive and objectionable message posted by Uju Anya today on her personal social media account.

“Free expression is core to the mission of higher education, however, the views views shared absolutely do not represent the values of the institution, nor the standard of discourse we seek to foster,” the statement read.

Telling the colonized how they should feel about their colonizer’s health and wellness is like telling my people that we ought to worship the Confederacy. 😒

“Respect the dead” when we’re all writing these Tweets *in English.* How’d that happen, hm? We just chose this language?

@Eugene_Scott
Real question for the “now is not the appropriate time to talk about the negative impact of colonialism” crowd:

When is the appropriate time to talk about the negative impact of colonialism?

@YaaAsantewaaBa
Reminder that Queen Elizabeth is not a remnant of colonial times. She was an active participant in colonialism. She actively tried to stop independence movements & she tried to keep newly independent colonies from leaving the commonwealth. The evil she did was enough

@twumpat
I can express my condolences to her ppl. But I can say that Britain exploited Jamaica for years until our independence. By then all our natural resources were plundered & brought to Britain leaving us hungry/desperate till today. They’ve done this all over the world.

@adedstv
As usual! Blaming everyone else except of course themselves,for their self inflicted pains! Ojukwu that selfishly threw his people in a lurch ,was ,and is indeed still celebrated by same hypocritical people!! You guys will tell your truth someday! I am expecting your usual abuses

This photo was tweeted by the twitter handle @GarethBale11 [his official twitter account] during the late hours of today displaying an Adidas branded tracksuit. It goes with the caption below: When I focus, the world slows […]