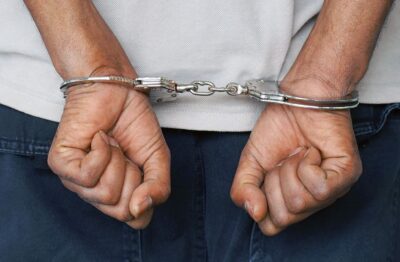 Security Guard Hacks Neighbour’s Wife And Daughter To Death: A 25-year-old security guard from Maradi, Niger Republic, was detained by men from the Kebbi state police command for killing his neighbor’s wife and her daughter in the state.

During an argument, the security guard killed the mother for allegedly calling him an animal and labeling him as useless.

To cover up his terrible deed, he killed the four-year-old, according to Kebbi Police Command’s Police Public Relations Officer (PPRO), SP Nafi’u Abubakar, who spoke to journalists in Birnin Kebbi on Wednesday.

According to Abubakar, the suspect, from Maradi, Niger Republic, went to the residence of one Aliyu Akilu, of Labana street, Sani Abacha bye-pass, Birnin Kebbi, on April 11 at approximately 2 a.m.

He claimed the suspect killed Aliyu’s wife, Sadiya Idris, 25, and their four-year-old daughter, Khadija Akilu, with a cutlass.

“On receipt of the report, a team of detectives attached to the Homicide Section, State Criminal Investigations Department (SCID), were detailed to investigate and they succeeded in arresting the suspect,” he said.

During a fight that erupted between them during the investigation, the suspect confessed to killing the deceased for calling him an animal and a useless watchman.

Abubakar stated that the case was being investigated and that the suspect will be charged in court once the inquiry was completed.

He urged all law-abiding residents to remain cautious and vigilant at all times, and to provide timely and correct information to the police and other security organizations to aid in crime prevention.

According to NAN, the suspect admitted to killing the woman and her daughter during the procession because he was upset by the words used to criticize him during an altercation the day before the incident.

“Yes, I killed her with cutlass, and when I noticed that her daughter was looking at me and knowing full well that she recognised me, I took her up and slammed her head on the floor of the room and she too died,” the suspect said.

A VERY UNFORTUNATE INCIDENT FOR THE FAMILY. WE ARE HOPING THAT JUSTICE WILL BE SERVED. ALSO THAT THE SOULS OF THE DECEASED REST IN PEACE

Trending Now :  James Brown Reveals Why He Disowned His Biological Mother
About Tori News Updates & Latest Gist 2022 3147 Articles
I am the GODCHILD. A High-Intelligent Brain Design of Utmost Love and Crazy Ideas . CLICK HERE TO SEE AUTHOR'S UPDATES SO FAR.