Singer Portable, Mocks Twitter User Who Said Him Travelling To London Isn’t An Achievement: Singer Portable has responded to a Twitter user who stated that coming to the United Kingdom is not an accomplishment.

Portable arrives in the UK for his international tour on Tuesday, April 26.

He expressed gratitude to E-money for making the trip possible.

On social media, he also posted images of himself in Queensland.

Portable removes his shirt in the image while posing for photos with his fans in the United Kingdom.

A displeased Nigerian lady wrote via her Twitter handle

Portable sighted her comment and fired back. He wrote; 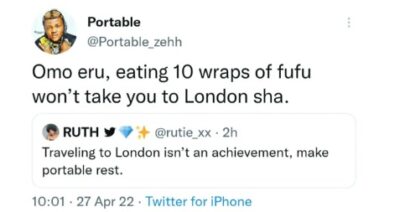 A lot of people need to learn that what may be special to one may not be the same for another. For someone like Portable, going to London is indeed an enormous achievement. Congratulations to him.