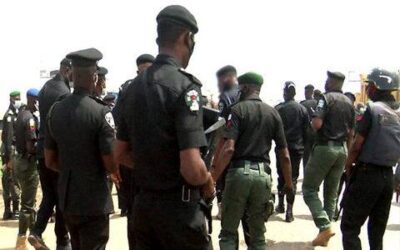 Suspects Who Killed Two Policemen In Station Attack Arrested In Anambra: According to a report by The Nation, some gunmen who allegedly attacked a police station in Anambra State, killing two policemen have been nabbed.

They were arrested and have been taken into custody.

The incident took place in Okija, Ihiala council in March.

The arrest was announced yesterday by Commissioner of Police, Echeng Echeng, who said the suspected mastermind of the attack and some of his men were apprehended on Wednesday.

“Many of the so-called unknown gunmen have been apprehended, weapons and vehicles recovered and victims rescued,” Echeng said.

“Just yesterday (Wednesday), we had a breakthrough in the command. In March, one of our stations was attacked at Okija and we lost two of our men.

“We want to announce to you that the mastermind of that operation was picked up yesterday with three of his men.”