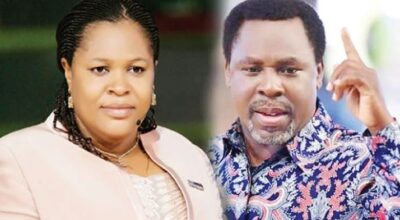 TB Joshua’s Widow Denies Prophesying About 2023 Polls: The new leader of the Synagogue Church of All Nations (SCOAN) Pastor Evelyn Joshua, the late wife of Prophet TB Joshua has denied prophesying over the 2023 polls.

It was reported that the wife of late Prophet TB Joshua had prophesised victory for Peter Obi.

In a video posted to Facebook last night, the church discredited a tweet alleging that Evelyn, the widow of SCOAN founder Prophet TB Joshua, prophesied victory for Peter Obi, though they never mentioned him.

The church said, “Our attention has been drawn to various social media posts falsely claiming that Pastor Evelyn Joshua has prophesied victory for a certain candidate in the 2023 Nigerian general election. Please disregard the tweet, as no such prophecy was given by Pastor Evelyn Joshua.”

SCOAN further reminded the public that authentic messages from the church are only given on Emmanuel TV, the church’s cable TV channel, and via its social media handles.