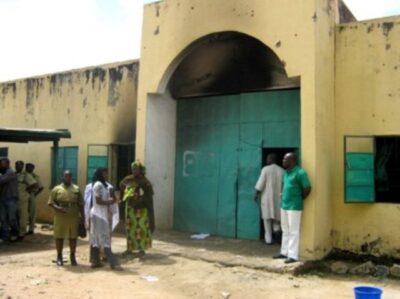 Many Inmates Escape From Kuje Prison In Abuja, Abba Kyari Taken Out Of Facility

According to SaharaReporters, it was also learnt that other inmates have been removed from the facility including the suspended deputy commissioner of police, Abba Kyari, who was remanded at the prison by a Federal High Court.

Kyari is standing trial for allegedly dealing in cocaine alongside four members of his former police unit, the Inspector-General of Police Intelligence Response Unit (IRT), and two other persons arrested at the Akanu Ibiam International Airport in Enugu, Enugu State, in January this year.

Gunmen suspected to be terrorists on Tuesday night attacked the prison facility in Nigeria’s capital city, and SaharaReporters learnt that the facility was ruined by the heavy firepower brought by the assailants.

Multiple sources told SaharaReporters that the gunmen invaded the facility around 10 pm.

Details about the casualties suffered in the attack were still sketchy at the time of filing this report, but one of SaharaReporters’ inside sources said many inmates were able to escape.

“The place was completely ruined and all the inmates have left the facility for now, including Abba Kyari,” one of SaharaReporters’ inside sources said.

“Most of the inmates have escaped from the facility; it is sad. It houses over 700 inmates,” another source said.

Earlier, while the attack was going on, one of our sources had said, “Can you hear the gunshot, we are under serious attack.”

Kuje prison was established in 1989, it has minimum and maximum holding cells where inmates are incarcerated.

It is famous for holding high-profile offenders, including former governors and ministers.