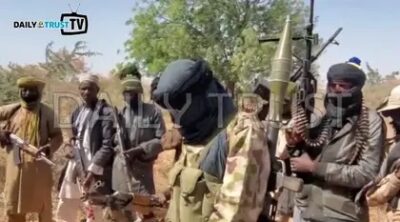 According to Punch, this means that each of the 43 victims are to pay N100m ransom.

The demand was communicated to the families of the hostages last week.

This is coming five days after the alleged masterminds of the abduction were freed from the Kuje Medium Security Custodial Centre, Abuja, by scores of armed men on Tuesday.

During the attack, over 300 Boko Haram fighters, convicted criminals and other inmates were released by the terrorists who overwhelmed the security operatives guarding the facility.

The Federal Government on Thursday uploaded to the Interpol database the data of 64 Boko Haram commanders who escaped from custody during the attack.

The PUNCH had reported that the terrorists attacked the Abuja-Kaduna train on March 28, killing eight and kidnapping no fewer than 61 passengers.

As part of their demands, they requested the release of 15 terrorist commanders, their children detained by the military and an undisclosed amount of cash.

On June 12, the terrorists released 11 hostages after 75 days in captivity, while another seven regained their freedom on Saturday.

The victims were reportedly released through the assistance of the Publisher of Kaduna-based Desert Herald newspaper, Mallam Tukur Mamu, who has been negotiating with the militants.

Giving an update on the situation on Sunday, a family member of the abducted victims, who didn’t want his name in print, told one of our correspondents that the terrorists were asking each family to cough up N100m ransom for the release of their loved ones.

The source said the seven victims that were released on Saturday paid an undisclosed amount.

He said, “It is money that is still delaying the release of the others. The terrorists are demanding ransom now. We heard the last set paid money. They (terrorists) have reached out to us as regards the payment of ransom.

“The situation now is that if you have your money, your loved ones would be freed. They have pegged the ransom at N100m. It is just unfortunate.”

Another family member said they were told that the terrorists were no longer interested in negotiating with the Federal Government, saying that N100m was required to free those in captivity.

He said they were still pleading with the terrorists to reduce the ransom as some of them could not afford the huge amount.

He noted, “My loved one has not been released, those that were released paid N100m. I don’t have that kind of money. The kidnappers got in touch with us. They said they were no longer negotiating with the Federal Government. Getting N100m is the dilemma many of us don’t have.”

Meanwhile, the seven persons released by the terrorists have reunited with their families on Saturday evening.

A victim, Sadique, who is the son of former Vice-Chancellor of the Ahmadu Bello University, Prof. Ango Abdullahi, broke down in tears while thanking God for regaining his freedom.

Trending Now :  I Have Nothing To Bequeath To My Children After My Tenure Except Education - President Buhari

“The soldiers were considerate enough to hand us over to Tukur Mamu, the lead negotiator after we insisted that we will not go with them. The most difficult job has been done by him. Alhamdulillah(Praise be to God).

“We were all taken to his office and even before then, he has contacted all our family members to come and pick us up. I can confirm to you that this man did this thing alone because even our family members were taken by surprise. They least expected the rescue soon, more so, that today (Saturday) is Sallah day,” Sadiq added.

He urged the Federal Government to hasten efforts to ensure that the remaining 43 passengers were released as soon as possible “because of their deteriorating health condition.”

Mamu said, “I sent the list to the government but honestly, there was nothing that was done. It was as a result of that that they (terrorists) threatened this attack (on Kuje prison) and eventually they succeeded in rescuing dozens of them(terrorists) instead of only 10.

Mamu commended the Governor of Yobe State, Mai Mala Buni over what he described as his “behind the scene role” in the release of the seven hostages.

He said, “Sincerely, I have so much respect for Governor Buni. From the information I have, there is no single Yobe citizen left in that forest but that governor demonstrated an uncommon concern on this issue.

“He has been in touch with me throughout, monitoring development and even reaching out to those concerned whenever there is a need to do so.

“He gave lots of support. This is a governor from the North-East far from the North-West where we have this crisis. He told me not to publicise his efforts but I had to.”

The Spokesman, Department of State Service, Dr Peter Afunanya, declined comment on the terrorists’ demand when contacted on the phone.

The Force Public Relations Officer, Muyiwa Adejobi, simply said he was not aware of the negotiations with the kidnappers.

The leader of the victims’ families, Dr Abdulfatai Jimoh, told one of our correspondents that after the release of the seven hostages on Saturday, 43 more hostages were still in the terrorists’ den.

But a security consultant, Mr Chidi Omeje, said the nation is in a messy situation, noting that the ransom would further empower the terrorists to further their criminal enterprise.

Another analyst, Jackson Ojo queried what he described as the government’s lackadaisical attitude to security issues, wondering why the security agencies cannot track down the hoodlums who are in constant communication with Mamu.

“It is unfortunate that we are in a country where miscreants called terrorists to dictate to our government. The maximum number of these terrorists cannot be more than a hundred thousand; so why will this little number dictate to a government that governs over 200 million people?” he asked.