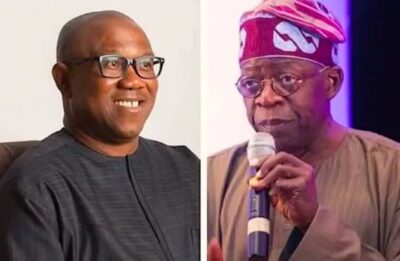 Tinubu Is My Elder Brother, I Respect Him – Peter Obi Speaks

Tinubu Is My Elder Brother, I Respect Him – Peter Obi Speaks: Peter Obi, the Presidential candidate of the Labour Party, has spoken about Asiwaju Bola Tinubu.

Obi described Tinubu, the APC’s presidential candidate, as his elder brother, saying he respects him.

Obi, in an interview with Chude Jideonwo on Instagram said “Tinubu is my respected elder brother and of course I respect him for who he is.

“It’s like Brazil today. They recognise that Pele was sometime a star, but they’re not going to field him in today’s match. Things have to move on.”

He said his supporters would agree with him that he was brought up to respect his seniors, especially when his seniors had one way or the other, contributed.

“They have done their own bit. Their bit might not be the best, but we have to recognise it, that there was a time that these people helped to keep the whole thing going. We don’t have to throw them away,” he said.

Obi, however, added that the only thing he was saying was “where we are today requires somebody with a character we can trust, competence, capacity, commitment.

“It is a job that requires physical and mental energy, because the country is in a mess. And we need to deal with it. It’s a 24-hours job.“

Alex Ekubo Explains Why Everyone Must Have Money

Alex Ekubo Explains Why Everyone Must Have Money Nigerian actor, Alex Ekubo has taken to Instagram to explain the importance of having money. The actor stated that it is true that having money doesn’t necessary […]