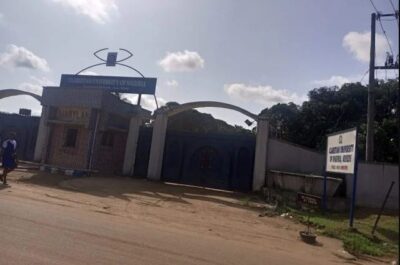 How & Why Nigerian Seminarian Died During A Good Friday Drama

Things are really happening these days, strange happenings hear and there and we are shocked the extent such happenings have gone; even in the house of God strange things happen. We also brought you tori news

on How A Man Stole Two Kids From A Church On Good Friday in one of our previous updates on Today’s Happenings.

I know you will are eager to discover why and how the death happened and the role he was playing in the drama, kindly read more details below; and also check out lots of other amazing contents on our Homepage.

As reports may have it, One of the students who simply identified himself as Mavis said the 25-year-old first-year student of Philosophy died on the spot. A very sad story to the university and church communities and the family of the deceased.

It was serious tragedy that struck recently at Claratian University of Nigeria, Nekede, in Owerri, Imo State, on Friday, when a seminarian, Suel Ambrose, slumped and died while acting in a drama on campus, according to Saturday PUNCH.

A Saturday PUNCH correspondent who visited the campus on Saturday morning was told by students that the deceased who hailed from Benue State was dramatizing the role of the biblical Peter in the Passion of Christ when the incident occurred.

The drama is a representation of the activities about how Jesus Christ was crucified. One of the students who simply identified himself as Mavis said the 25-year-old first-year student of Philosophy died on the spot.

The student said, “He was playing the role of the biblical Peter in the drama and that process when Peter cut the ear of one of the soldiers and Jesus fixed the ear and ask Peter to let them do their wish. You know how passionate the play is.

“So when the soldiers chase the disciples to drive them away from Jesus, the young man fell on the floor and started bleeding. We took him to our school hospital and the doctors did their best but he was not responding to treatment. We took him to the Federal Medical Center in Owerri where he was pronounced dead.”

“The drama was in commemoration of the death and resurrection of Jesus Christ in respect to the Easter celebration. He was born in 1997. He is a year one student and had the dream of becoming a priest in the Catholic church.”

Our correspondent observed that the school premises was quiet as there was no activity taking place with respect to the Easter celebration after the incident in the school.

The priest in charge of Student Formation in the university, Fr Chukwuemeka Iheme, when approached by our correspondent, said that the institution would brief the public after the “authority gives us permission to do so.”

May God grant him eternal rest in His bosom, Amen. It is really really side and we advise church communities to take careful measures while acting such dramas, making sure those who volunteered to partake don’t have underlying critical health challenges. They should also try not to mimic the real stories. May God give his family and friends the fortitude to bear the tragic loss. Still remember that we have also brought you tori news on How A Man Stole Two Kids From A Church On Good Friday.

FOLLOW HERE TO SEE OTHER TORI NEWS ON TODAY’S HAPPENINGS

About @TrendsOfLegndsTeam 19597 Articles
We inspire people with whatever we are destined to do in life. We're on twitter: @MusicParrot1 & on Facebook: @TrendsoflegendsBlog