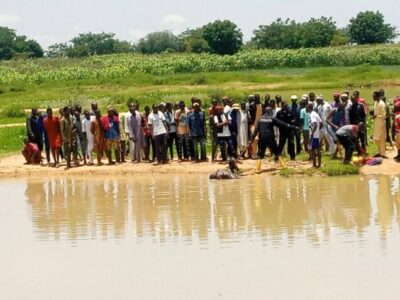 Tragedy As Keke Napep Rider Drowns Inside River In Kano

Tragedy As Keke Napep Rider Drowns Inside River In Kano: Ammar Ibrahim, a 25-year-old man, has drowned inside a river.

The man drowned in a river at Tattarawa village, in Dawakin Tofa Local Government Area of Kano State.

This is contained in a statement issued by the Public Relations Officer of the State Fire Service, Alhaji Saminu Abdullahi, on Wednesday in Kano.

“We received an emergency call at about 11:34 a.m. from one Muhammad Sani and we sent our rescue team to the scene at about 11:55 a.m.

“The tricycle operator, who was on his way back to Kano, parked at the roadside near a river with the intention of washing the tricycle, but unfortunately slid into the river.

“He made several efforts to escape but he became helpless,” Abdullahi said.

He said that the late Ibrahim was brought out of the water unconscious and was later confirmed dead.

Abdullahi said the corpse had been handed over to Insp. Jerry Mathew of Dawakin Tofa Police Division.