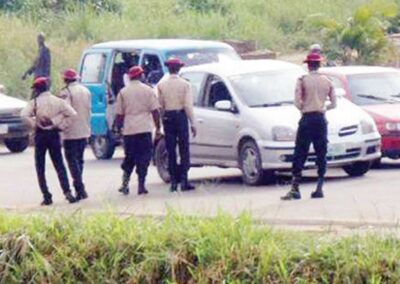 Two Dead, Five Injured In Ogun Road Crash: Two lives have been lost in a tragic accident that occurred in the early hours of Monday along the Lagos-Ibadan expressway.

Five other persons were also said to have sustained injuries in the accident which happened at about 12:20am around Mowe bus stop.

The Federal Road Safety Corps (FRSC) said 20 men were involved in the incident; saying, “Five persons were injured and two deaths recorded from the crash.”

The FRSC spokesperson in Ogun State, Florence Okpe, told DAILY POST that a Toyota Hiace bus with the registration number, GMT641XL, had rammed into a moving Benz truck registered as KSF320XX.

“The suspected causes of the fatal crash were excessive speed and dangerous driving which led to the loss of control on the part of the bus and it rammed into the moving truck,” Okpe stated.

She added that the injured victims have been conveyed to Famobis Hospital, Mowe, while the dead bodies were carried away by the family.

Meanwhile, the FRSC Sector Commander in Ogun, Ahmed Umar, has expressed worry over the rate at which most commercial drivers disobey common driving rules like speeding.

Umar threatened that any vehicle especially, commercial ones, caught without a speed limiting device would be sanctioned accordingly.