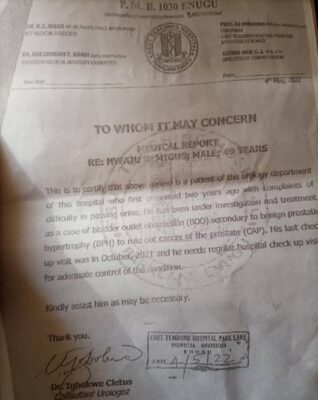 Two Nigerian Lawyers In Trouble For Allegedly Forging Medical Report To Secure Bail For Murder Suspect In Enugu: According to SaharaReporters, two lawyers in Enugu State may have gotten themselves into serious trouble.

They got into trouble for allegedly forging a medical report from the State Teaching Hospital (Park Lane) to secure court bail for a murder suspect, Remiugius Nwaju.

SaharaReporters gathered that Remiugius Nwaju was arrested by the Enugu State Police Command for allegedly killing his wife, Philomena on November 15, 2021.

He was subsequently arraigned before an Enugu State Magistrate Court which remanded him in the Enugu Maximum Correctional Centre.

Since then, Remiugius Nwaju had been in detention for the alleged murder of his wife.

SaharaReporters further gathered that in a desperate attempt to secure his bail, his defence Counsels – Prince Sunny Onyike and Ogonnaya Okoro filed an application for bail of Mr Nwaju on May 10, 2022 before Hon. Justice Odugu of the State High Court.

In the motion for the bail which SaharaReporters obtained, the applicant tended a medical report from Enugu State University Teaching Hospital Parklane, to show that the accused had developed asthma and high blood pressure which could not be adequately handled at the Correctional Centre coupled with prostrate.

The hospital report the duo tendered before the court was dated May 4, 2022 and signed by one Dr. Igbokwe Cletus, who claimed to be Consultant Urologist.

Titled “To Whom It May Concern, Medical Report Re: Nwaju Remigus; Male; 49 Years”, the report read, “This is to certify that above named is a patient of the urology department of this hospital who first presented two years ago with complaints of difficulty in passing urine.

“He has been under investigation and treatment as a case of bladder outlet obstruction (BOD) secondary to benign prostatic hypertrophy (BPH) to rule out cancer of the prostate (CAP). His last checkup visit was in October, 2021 and he needs regular hospital checkup visits for adequate control of the condition.

“Kindly assist him as may be necessary,” it read.

However, responding to a request to authenticate the medical report, the management of the ESUT Parklane Hospital, denied issuing the said report.

The hospital in a reply letter with Ref: ESUTHP/C-MAC/VR/51/VOL.2/29, dated June 30, 2022 and signed by Dr. Okpara T.C. Chairman Medical Advisory Council (MAC), said that the Hospital in general doesn’t have a doctor that bears the name “Dr. Igbokwe Cletus” a Consultant urologist.

The letter addressed to one Obumneme S. Okafor was titled: “Confirmation Of Medical Report – RE: Nwaju Remigius,” reads:

“May I refer to your letter on the above subject date 22nd June, 2022. The hospital has investigated the attached medical report purportedly issued to Remigius and discovered it not to have emanated from our hospital based on the following reasons:

“There is no such name as Nwaju Remigius, male with age 49 in both our manual and electronic data. ESUT Teaching Hospital does not have urology department as claimed by the Author.

“There is no consultant in surgery department in particular and ESUT Teaching Hospital in general that bears the name “Dr. Igbokwe Cletus” a Consultant urologist.

“Following the above, the medical report is not Authentic and did not emanate from us.”

Stemming from the discovery, Mr. Francis Obiedelu, senior brother of the murdered late Philomena, petitioned the State Commissioner of Police, Abubakar Lawal to investigate and prosecute the lawyers for perjury and forgery.

The petition which SaharaReporters obtained on Friday is titled “Case Of Perjury/Forgery – RE: Prince Sunny Onyike Esq, Ogonnaya Okoro Esq; Request For Urgent Investigation And Prosecution.”

In urging the Police Commissioner for thorough investigation, Obiedelu expressed reservation whether one of the lawyers actually existed.

According to him, “in my presence, B. C. Oguine Esq also went through the available 2020 ENBAR Diary of lawyers in Enugu State and could not find the name of Ogonnaya Okoro as a lawyer in the diary. Possibly there is no lawyer known as Ogonnaya Okoro, Prince Sunny Onyike Esq will explain more.

“Hon Commissioner Sir, the duo of Prince Sunny Onyike and Ogonnaya Okoro had told lies on oath and forged a medical report for the purpose of securing bail from Court for Remigius Nwaju. My counsel who holds the joint fiat of the Hon. Attorney-General of Enugu State informed me and I verily believe them that these are criminal offences under our laws.

“These days, Nigeria is undergoing turbulent crises of lawlessness, dubiousness, falsehood especially from persons who ought to guide and provide light and orderliness in our society.

“If these could come from the persons who know the law it means that we are gone forever. I pray that this matter be thoroughly investigated and the right thing be done if found my complaint true to restore the dignity of Courts and the legal profession.”