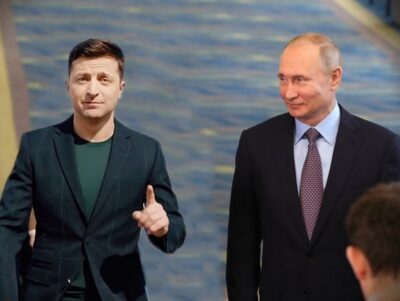 Ukraine Offers To Negotiate With Russia With No Conditions

Ukraine Offers To Negotiate With Russia With No Conditions: Following Russia’s invasion of Ukraine, a top Ukrainian negotiator volunteered to negotiate with Russia “without restrictions” on Wednesday.

This agreement will allow troops and people in besieged Mariupol to flee.

“Without any conditions. We’re ready to hold a ‘special round of negotiations’ right in Mariupol,” Mykhailo Podolyak, an advisor to Ukrainian President Volodymyr Zelenskyy and his lead peace negotiator, wrote on Twitter.

Surrounding Russian forces have began a destructive bombardment assault, targeting civilian areas such as hospitals, theaters, shelters, and schools, trapping a band of Ukrainian fighters and civilians in the important southern port city.

Oleksiy Arestovych, an advisor to Zelenskyy, said on Tuesday that Ukraine would not hold peace talks with Russia if President Vladimir Putin’s forces captured Mariupol.

We hope to see the end of the war between Russia and Ukraine. Hopefully, the two countries will reach an agreement soon.