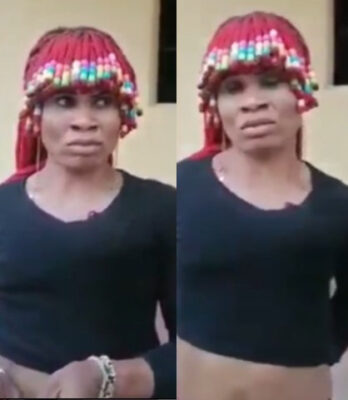 Cross Dresser Apprehended In Delta During S#x: Some residents of Asaba in Delta state have apprehended a cross dresser.

The cross dresser identified as Amarachi during interrogation said he is an indigene of Imo state but resides in Lagos.

He said he was in an area where s#x workers usually hang out, when two men accosted him, asked for s#x, and promised to give him N1500 which he agreed to.

He said they were having s#xual interc#urse when he was apprehended.

He further stated that he has been involved in such an act since 2016.

Watch a video of him being interrogated below: