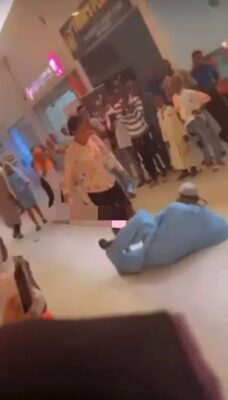 Lady Slaps Boyfriend After He Proposed To Her

Lady Slaps Boyfriend After He Proposed To Her: A man got the shock of his life after he went down on one knee and asked his girlfriend to marry him.

Following the Eid Mubarak celebration, a man dressed in his native attired took his supposed girlfriend out to a mall and had decided to propose to her there.

A gesture, which was meant to be romantic soon turned into a disgraceful sight as the lady gave him her response by delivering a resounding slap.

The slap sent the man to the floor, drawing shocked expressions from onlookers who had gathered to witness the bizarre spectacle.

According to reports, the scene had occured at a mall in Ibadan, Oyo state.

Watch The Video Below;