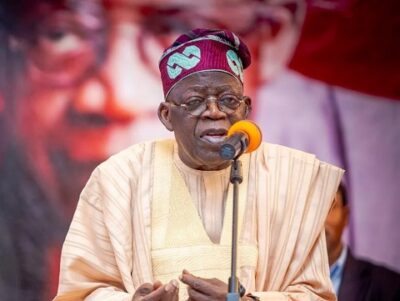 Moment Tinubu Forgot Name of His Party During Interview

Moment Tinubu Forgot Name of His Party During Interview: The Presidential candidate of the All Progressives Congress, Bola Tinubu has caused a serious stir online after he forgot the name of his party during an interview.

The incident has sparked rumours that he might be suffering from dementia.

Tinubu was speaking to members of his party in public and almost addressed the APC as ‘Action Congress.’

However, he was quickly corrected by one of the aides who stood beside him.

Action congress was among the parent parties that merged to birth the APC in 2014.