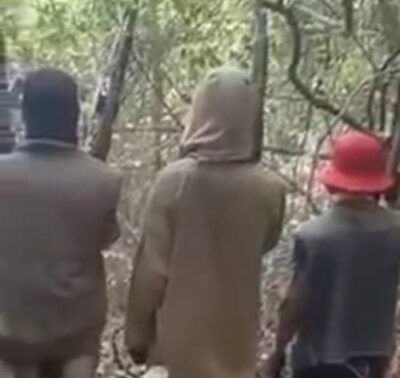 Unless Kanu Is Released, No Election in BiafraLand – Unknown Gun Men Warns

Unless Kanu Is Released, No Election in BiafraLand – Unknown Gun Men Warns: According to a report by SaharaReporters, some “unknown gunmen” who are apparently terrorizing big areas of Nigeria’s southeast region have demanded the immediate release of Nnamdi Kanu, the leader of the outlawed Indigenous People of Biafra (IPOB).

After the Nigerian government deported Kanu from Kenya in June 2021, his lawyers labeled the operation “illegal, unlawful, and unconstitutional extradition.” Kanu is being held by the Department of State Services (DSS) at its Abuja headquarters.

He is currently facing charges of treasonable felony and terrorism in the courtroom.

A member of the gang said in a 2-minute 55-second video taken in woodland that if the government does not release Kanu, there will be no election in the region.

“We the unknown gunmen in Biafraland, have come to make our position known to the public. We are here to protect our fatherland by all means. We don’t have any sponsors. And we are not planning to have,” he said.

“There shall be no election, and anybody that attempts any election matter will die. And for the INEC people, what will happen to you when we get you, only God knows, no more posters, political posters in Biafra land, if you try us, you campaigning, fire will burn you, fake Biafra media, you think you can post rubbish, we the unknown gunmen have endured enough from you. We shall no longer tolerate any rubbish.”

This is a situation that calls for immediate attention, otherwise, we may have full-blown terrorism in the South East of Nigeria.