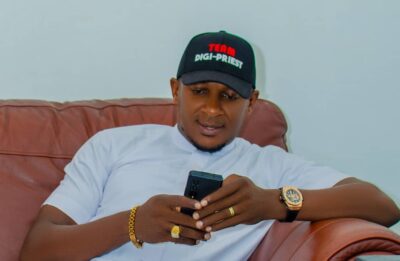 Engr. Ifeanyi Aniagoh Shares How He Got Into Government

We Shall Keep Pressing: Engr. Ifeanyi Aniagoh Shares How He Got Into Government in a recent press release shares briefly how he got into government with the aim of using his God-giving abilities to make positive impacts through his leadership positions.

He revealed how pressed his way from home into government house because he made good use of his devices and social media participation. This is one of the proofs behind his nickname as Digi-Priest.

Below comes the full details of the press release:

We shall keep pressing…

I moved from responsibly pressing phone at home to working as a Senior Aide in the Government House;

Via the new media, I empowered many, built my network, grew my net worth and connected to my wife ☺;

When I get to the State House of Assembly… The Digi-Family will be duly represented!

The good people of my Constituency and beyond will reap from the enormous entrepreneurial opportunities in the Digital ecosystem; That’s why our #MOP2023 Project is Màkà Ọganiru Ụmụowelle!

Trending Now :  Simple Online Steps To Check/Know If You Are A Registered Voter In Nigeria

Engineer Ifeanyi Aniagoh is the best and most qualified among all those coming out for the Anambra State House of Assembly, Njikoka 2 and through his #TeamDigiPriest has set out to make another history as a Digi Priest if the good people of Abagana, Nimo and Abba communities will him the opportunity to represent them in the State House of Assembly.

Engineer Ifeanyi Aniagoh, an illustrious son of Abagana in Njikoka Local Government Area of the State has done his best with the little opportunity given to him as an Aide to the immediate past Governor of Anambra State; if given more chances to attain higher positions of leadership will no doubt do more in the spirit of good representation.

CHECK THIS OUT: Team Digi-Priest By Engr Ifeanyi Aniagoh (M.O.P): All You Need To Know

About @TrendsOfLegndsTeam 19599 Articles
We inspire people with whatever we are destined to do in life. We're on twitter: @MusicParrot1 & on Facebook: @TrendsoflegendsBlog