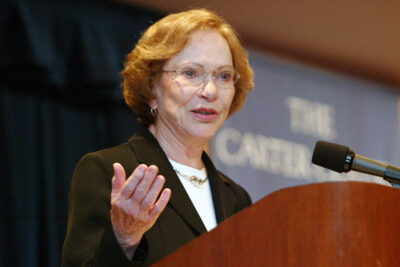 Who Is A Great Leader? Find Out From Eleanor Rosalynn Carter’s Definition

Who Is A Great Leader: One of the world renowned female legends Eleanor Rosalynn Carter gave us her own definition of a Great Leader. Read further to learn more and I hope you take something home from her definition.

Eleanor Rosalynn Carter is an American writer and activist who served as first lady of the United States from 1977 to 1981. For decades, she has been a leading advocate for numerous causes, including mental health.

Among her published books are: First Lady from Plains (1984), Within Our Reach: Ending the Mental Health Crisis (2010), Helping Someone with Mental Illness: A Compassionate(1998), Helping Yourself Help Others: A Book for Caregivers (1994), etc.

Eleanor Rosalynn Carter, the wife of the 39th President of the United States, Jimmy Carter, defined a GREAT LEADER as it is contained in her philosophy below.

The question we should ask ourselves is: have our leaders been able to fulfill that which is stipulated in the above philosophy of the former First Lady of United States?

READ ALSO: Here Is One of the Best Things To Give Your Mental & Psychological Beings This Month