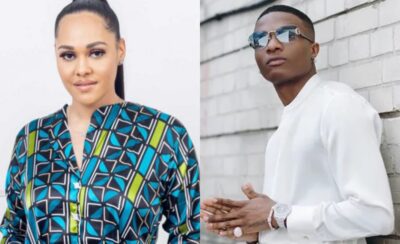 Why I Broke Up With Wizkid – Tania Omotayo

Recall that the duo went their different ways in 2016 following allegations that the singer cheated.

The fashion businesswoman spoke in a recent interview with Chude Jideonwo, the media entrepreneur.

Omotayo and Wizkid parted ways in 2016 amid reports that he was expecting his second child with Binta Diallo.

Replying to a question on whether she was happy in the relationship dating back six years ago, Omotayo affirmed.

“I consider myself to live in my own world. I live in a bubble. I don’t like [doing] things on the outside,” she said.

“So imagine being 21 and being thrown into the media at a time when it wasn’t normal for young people to be in a relationship and be so public. I knew that, at that time, we were the only ones.

“That was before Iceprince came out with his girlfriend years later. So it was new at the time. It was so bad that they insulted my destiny. At some point, they started insulting my legs, saying I had really skinny chicken legs.

“We were young and he was becoming a global superstar. There’s no way we wouldn’t have had issues.

“It’s impossible. It comes with that [celebrity] life. I couldn’t have predicted that. At some point, we decided that we had different things that we wanted to do. But was I happy? Yes. That was like my best friend. And it was fine.”

Apart from Diallo, Wizkid has kids with Shola Ogudu whom he met in 2010, and Jada Pollock, his manager.