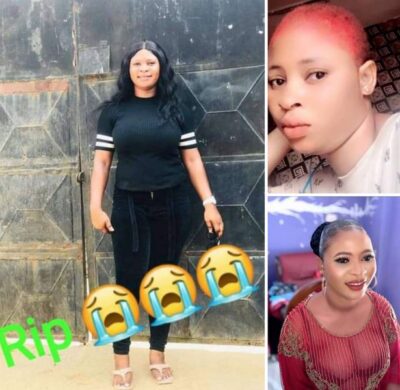 Olaitan, who had a seven-year-old son, was said to be in a serious relationship with Saheed and was saving money in his bank account.

However, he used the money to marry someone else over the weekend, according to reports.

Upon receiving the news, Olaitan reportedly consumed a poisonous substance and passed on from internal injuries.

Olaitan was with Saheed last Thursday, September 8, and she had no idea that he was getting married over the weekend.

On Friday, September 9, a friend of hers told her Saheed, whom Olaitan reportedly spent the previous night with, was getting married on Sunday, September 11.

Trending Now :  How An Ex-Convict, Akintunde Joy Was Arrested For Burglary In Osun

Olaitan’s boss was quoted as saying: “My salesgirl has been giving him money from my shop for upkeep, but he squandered the whole money. She even sent him N10k on Friday. After she had ended it all, we called him and he said it’s none of his business.”

Olaitan’s alma mater posted a tribute to her on Facebook and advised people not to commit su#cide because of anyone.