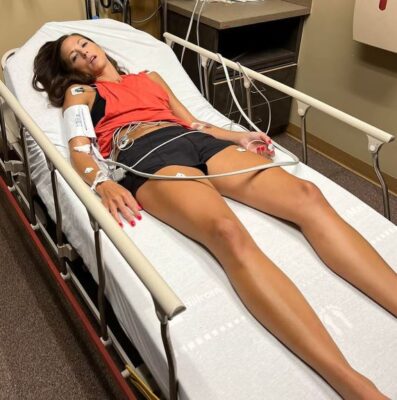 Woman Nearly Dies After Picking Up A Dollar Bill She Found On The Ground: A woman identified as Renee Parsons has been hospitalised after she almost died while she picked up a dollar bill from the ground over the weekend.

She said the incident happened on Sunday, July 10, while travelling to a conference in Dallas, texas, with her husband and two children.

During the trip, the family stopped at a McDonald’s in Bellevue, Tennessee, when Renee spotted some stray cash on the ground and decided to pick it up.

“I see a dollar bill on the ground. Thinking absolutely nothing of it — I picked it up,” Renee wrote on Facebook.

Within minutes, her body went numb and she could barely move or breathe, News 2 reported.

“It’s almost like a burning sensation, if you will, that starts here at your shoulders, and then it just goes down because it’s almost like it’s numbing your entire body,” explained Renee.

Her aghast husband painted the horrific scene: “She hadn’t said anything for a while, then she said, ‘Justin, I am sorry. I love you.’ Then she just quit talking.”

Justin told News 2: “She looked like she was dying. She certainly was unconscious and very pale.”

Before she passed out, she had reportedly grabbed her husband’s arm with the same hand she clutched the money in, and he too started experiencing similar symptoms as his wife. His lips went numb and his arm sprouted a rash.

About Tori News Updates & Latest Gist 2022 3434 Articles
I am the GODCHILD. A High-Intelligent Brain Design of Utmost Love and Crazy Ideas . CLICK HERE TO SEE AUTHOR'S UPDATES SO FAR.