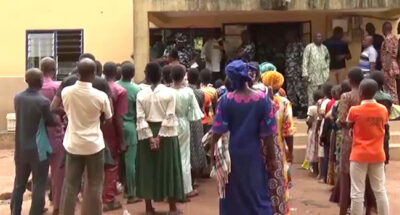 Worshippers Rescued From Church Basement In Ondo State Refuse To Be Reunited With Their Families: Some persons rescued from the basement of a church have reportedly refused to be reunited with their family members.

Recall that we had reported that at least 77 worshippers were brought out of the basement of a church in Ondo State over the weekend.

The worshippers, including children, were ‘rescued’ from the basement on the premises of The Whole Bible Believers’ Church, also known as Ondo Church, in Valentino area of Ondo Town.

It was reported that the church was holding a seven-day retreat when the police stormed its premises last Friday. Seventy-seven people comprising 26 children, eight teenagers, and 43 adults were let out as some of them had been reportedly held for about three weeks.

Some of the parents whose children were in the congregation without their consent had reported the case to the police.

Channels Television reported that a dramatic scene played out on Monday July 4, as some of those rescued refused to go with their families, insisting that they would remain with the pastor. This made their relatives accuse the Pastor of hypnotizing them.

Speaking to the news station, Commissioner for Women Affairs and Social Development in Ondo, Dr Juliana Osadahun said the government will meet with the police and relatives of the victims to get a proper briefing on the incident and take appropriate actions.

About Tori News Updates & Latest Gist 2022 3433 Articles
I am the GODCHILD. A High-Intelligent Brain Design of Utmost Love and Crazy Ideas . CLICK HERE TO SEE AUTHOR'S UPDATES SO FAR.