The seven-year-old child named after Governor Mai Mala Buni, and two others died in a road accident along the Maiduguri-Kano highway on Saturday, June 11.

The Press Secretary to the Deputy Governor, Hussaini Mai Suleh, who confirmed the incident in a statement on Sunday, June 12, said the deceased has since been buried according to Islamic rites at the palace of Mai Fune in Damagum town, Fune Local Government Area of Yobe State.

Commenting on the tragic incident, the bereaved deputy governor said, “I will forever remember him as somebody close to me.’’

Meanwhile, Governor Buni has expressed shock over the death of his deputy’s son and commiserated with Gubana.

The governor further prayed for the quick recovery of those who sustained injuries in the accident.

Buni also condoled with Maina Digma Gana, a member representing Fune state constituency, whose 18-year-old daughter died in the crash as well as the family of the other victim, late Alh. Ado Garba.

Governor Buni described the deaths as sad and shocking “but that is the will of Allah (SWT), our creator.

“It is their appointed time to depart the World and we pray to Allah (SWT) to forgive their shortcomings and grant them eternal rest in Aljannatur Firdaus. May Allah also grant their families, the fortitude to bear the huge loss” the Governor said. 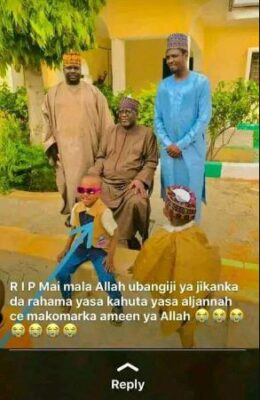 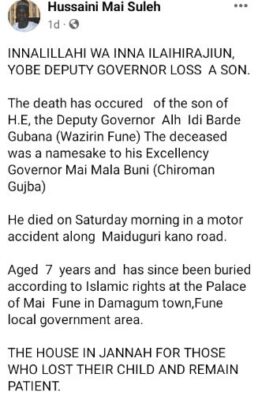